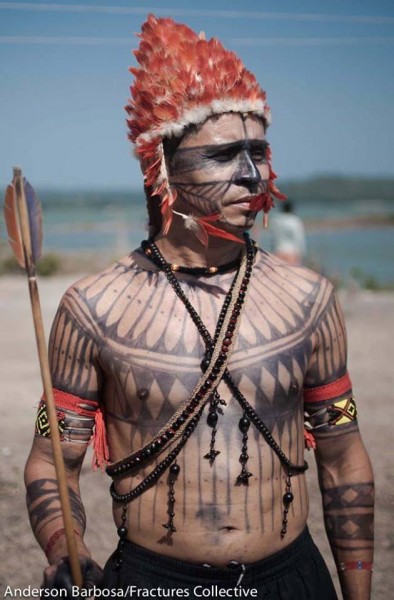 Everaldo Manhuary Munduruku poses for the photograph at the XI Middle Tapajós Munduruku Assembly, at Dace Watpu village, in September 2015, located at Daje Kapap Eypi territory, near Itaituba city, Pará state of Brazil. The Brazilian government plans to construct two hydroelectric projects at this area of the Tapajós river, São Luiz and Jatobá dams, which will directly affect indigenous lands and other riverine communities living in there for many generations. The assembly aimed to discuss precisely this issue, and there both Munduruku leaders and leaders from other local traditional people’s communities committed to fight against the development model imposed by the federal government to provide electric energy to the rest of the country. To achieve these projects, the government has been supressing local peoples’ right of consultation, who will be seriously affected by the large construction plans in the Brazilian Amazon. Recently, the Munduruku leaders Maria Leusa Kaba and Rozeninho Saw, who have been fighting against the hydroelectric dams in the Tapajós river, have visited Paris to receive the UN Equator Prize. They took part of the Alliance of the Mother Nature Guardians, next to other important leaders who also defend the forests and the indigenous peoples’ rights, such as the Kayapo chief Raoni Metuktire. Despite all the denounces of violations against the indigenous rights, as well as the claims to accomplish the Brazilian Constitution and demarcate the ancestral lands of the Munduruku people at Middle Tapajós, the Brazilian government has announced for the next semester the auction for the two dams in the region. They will directly affect their sacred lands.

The author didnt add any Information to his profile yet